I was a depressed child myself – always crying or having some kind of hysterical tantrum, and, on top of this, I was precociously pessimistic and cynical – which is one of the reasons I opted to study psychology at University in London; I wanted to understand the illness better. Indeed, my undergraduate dissertation comprised a study of the effects of childhood depression on academic performance (the results demonstrated a significant inverse correlation, supporting my hypothesis).

In my experience, many people who study psychology are motivated to do so by a wish to understand their own psychological problems, or those of someone to whom they are close, so I was by no means an exception.

Above: Withdrawal: one (dysfunctional) coping mechanism young people may use to deal with depression

How Is Depression Manifested In Children?

Different children display signs of suffering from depression in different ways. Some symptoms that they have are similar to those of adults, whereas others are more age-specific.

– needing too much sleep

– disrupted sleep (including insomnia and nightmares)

– a negative view of self, others and the world in general (this is sometimes referred to as a negative cognitive triad)

– poor concentration which can, in turn, lead to academic underachievement.  (Certainly, in my own case, I was frequently preoccupied with problems relating to my home- life when I was at school; a couple of times I even had to leave lessons due to fits of weeping. I sometimes wonder if I could have achieved more had my home life been less dysfunctional).

– loss of interest in personal hygiene/appearance

– loss of ability to derive any pleasure from life (sometimes referred to as anhedonia, click here to read my article on this)

– a pervasive sense of hopelessness and helplessness

– withdrawal (including from family and socially in general). After I was thirteen and had moved in with my father and step-mother I hardly ever spoke to them at all, nor did they give the impression of having an overwhelming desire to speak to me(!) When we did interact it was almost invariably confrontational. My father would leave for work early, leaving myself, my step-mother and step-brother. My step-mother and step-brother (her biological son) would have breakfast together and I would breakfast alone. This was an arrangement which seemed to suit both parties equally well; certainly no one ever suggested altering it

But Aren’t All Teenagers Moody?

Many are, but clinical depression goes significantly beyond what some may describe as ‘normal teenage moodiness’. The more of the above symptoms a young person has, and the greater their intensity, the more likely it is that s/he is suffering from clinical depression. 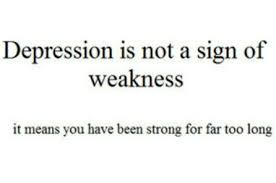 95% of clinically depressed young people have at least one of the following difficulties to cope with :

– live in a dysfunctional family in which there is significant disharmony

– have suffered a form of abuse (sexual/physical/emotional)

– have a mentally ill parent (eg one who is clinically depressed)

– are in local authority care

– are in a young offenders’ institution

– are significantly bullied at school

Other Factors Linked To The Development Of Depression In Young People:

– FAMILY DYNAMICS: research suggests that young people with demanding and critical parents are at greater risk of developing depression as are young people whose parents minimise their child’s successes and achievements whilst over-focusing on their perceived failures.

– FEELINGS OF HELPLESSNESS: because of the nature of childhood, young people often feel utterly trapped in their situation and powerless to do anything about it (click here to read my article that examines the link between feelings of helplessness and depression).

– GENES: Research suggests that young people may inherit a genetic predisposition to developing depressive illness but that this is not enough on its own to cause the illness – it seems environmental stressors must also be experienced for the predisposition to become actualised. However, the relationship between genetic inheritance and the development of depression is a highly complex one and requires further research.

Young people are often reluctant to talk about their mental state as they often feel (needlessly) embarrassed and ashamed about it. Certainly that was true in my own case. Young people tend not to like having such potentially stigmitizing attention drawn to them or being seen as ‘different’ from their peers. It follows, of course, that few are willing to put themselves forward for treatment. Because of this, depression can remain largely hidden in young people. 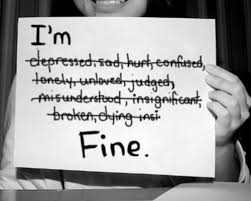 Above: Young people may not wish to discuss their inner feelings or may be embarrassed/ashamed about doing so.

The problem is made worse by the fact that parents, teachers and doctors are sometimes liable to underestimate a young person’s level of distress and inner emotional turmoil. Being repeatedly told to ‘cheer up’ or ‘count your blessings’ is not, sadly, going to cut it.

Due to the above, it is estimated that only approximately one in four young people who would be likely to benefit from treatment for their condition actually receive it.

It is vital that the treatment of depression in young people includes tackling its underlying environmental causes (such as a dysfunctional home life). Treatment options iinclude: 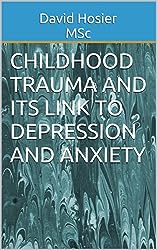