Not very long ago, I was in the supermarket, and, as the till assistant was scanning my shopping items, he gave me a quizical look and asked, ‘Are you alright, you seem to be breathing very heavily?’ This was unexpected and made me feel even more self-conscious than I normally do. In such situations, my mind usually goes blank and I only later realize what I should have said (l’esprit de l’escalier, as I believe they say in France).

However, on this occasion, I did, unusually for me, manage to mutter an immediate response, attempting to casually pass off my canine-like panting as a mild attack of asthma (untrue). The till assistant eyed me wearily, looking disconcertingly unconvinced, as I hastily paid for my items and made my shame-faced escape, immediately lighting a cigarette once back on the street ( thus making my ‘asthma’ excuse look all the more ludicrous).

As a result of this, I’ve been too embarrassed to return and have been forced to take my business elsewhere.( The new supermarket I go to never seems to stock what I want. On the odd occasion they do stock what I want, it seems that once they realize this they immediately discontinue stocking it.)

The truth of the matter is that, at the time, I was pretty much constantly hyperventilating. In this article, I want to look at why and how this can happen. 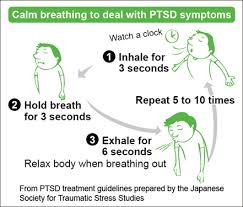 Above – a suggested breathing exercise to help manage the physiological effects of stress.

We have seen in other articles I have published on this site that there is a significant link between the experience of severe childhood trauma and the subsequent development of post traumatic stress disorder (PTSD) in later life.

If we have developed PTSD, one of the main reasons it can be so intensely distressing is the effect severe and protracted exposure to traumatic stress can have on the body, or, more specifically, the nervous system.

After severe and prolonged trauma, the body can, in effect, become stuck in ’emergency mode.’ In this state, we either ‘freeze’ or else enter the well known ‘fight or flight’ state. The psychological researcher, Levine, with regard to this, suggested that, in response to trauma, we sometimes get stuck in the ‘freeze’ state so that the physiological arousal caused by the fear our experience of trauma has induced becomes trapped in our nervous system and cannot be dissipated.

This, in turn, makes the nervous system yet more vulnerable and sensitive to the effects of stress, so that further stressors in life (on top of the stress of the original trauma) compound the problem exponentially.

To illustrate how this pent up physiological arousal cannot be discharged (making us feel constantly keyed up, on edge and agitated) Levine uses the metaphor of a car being revved up but with the brakes on. Just as this puts great strain on a car’s engine, so, too, is our nervous system placed under enormous strain by a similar process.

This highly distressed state actually alters the cells in our nervous system (in a process called KINDLING) and it is this that causes our nervous system to become hypersensitive and hyper-reactive, particularly in response to any stressors which, consciously or unconsciously, remind us of our original trauma.

To find out about PTSD treatment options, click here.