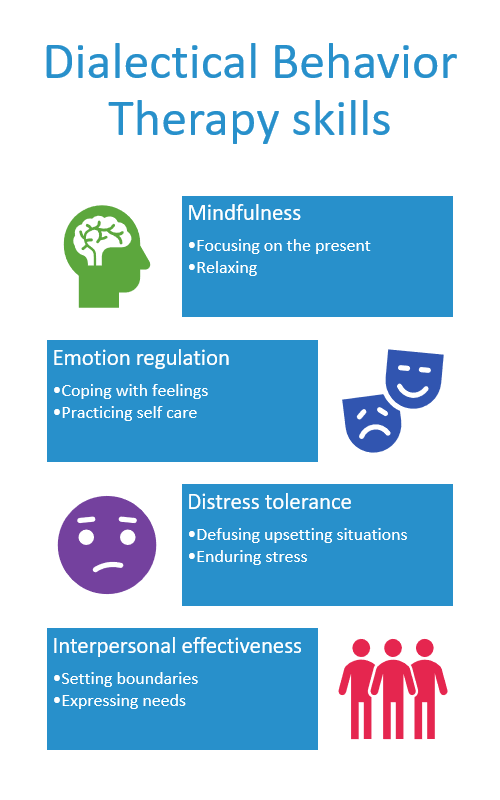 DIALECTICAL BEHAVIOR THERAPY (DBT), which helps individuals develop skills of mindfulness, emotion regulation, distress tolerance and interpersonal effectiveness (see diagram above for more detail) is an exciting, relatively new treatment option for those suffering from BPD. It is a therapy which has elements in common with cognitive behavioural therapy (CBT).

It is an evidence-based treatment (ie it is backed by scientific research).

Dialectical behaviour therapy (DBT) is a type of therapy specifically designed to treat people with BPD and, whilst it is made up of many elements, four, in particular, stand out as vital for the treatment to be effective. These are as follows:

In the past, BPD was considered to be extremely difficult to treat, but, with the development of therapies such as CBT and DBT, the prognosis is now far more optimistic.

DBT was originally created by the psychologist Marsha Lineham; at first, it was developed with the treatment of females who self-harmed and were suicidal in mind. However, since then, its possible applications have become much broader; it is now used to treat both males and females suffering from a large array of different psychological conditions. These include:

DBT has many elements in common with CBT; in addition to this, it also borrows from ZEN and a therapy, which is becoming increasingly popular, called MINDFULNESS.

DBT has been particularly successful in the treatment of  BORDERLINE PERSONALITY DISORDER. It is thought that one of the main CONTRIBUTING FACTORS of BPD is a traumatic childhood in which the child grows up in an INVALIDATING ENVIRONMENT and is made to feel, bad, guilty and worthless Such a childhood environment is especially likely to result in the child developing BPD in later life if he/she also has a BIOLOGICAL VULNERABILITY (carries certain genes making him/her particularly vulnerable to stress).

When a person is suffering from BPD the condition causes him/her to REACT WITH ABNORMAL INTENSITY TO EMOTIONAL STIMULATION; the individual’s level of emotional arousal goes up extremely fast, peaks at an abnormally high level, and, takes much longer than normal to return to its baseline level.

This condition leads to the affected individual – a victim of his/her uncontrollable, intense emotional reactions – prone to stagger in life from one crisis to the next and to be perceived by others as emotionally unstable. It is thought that, due to the invalidating environment which the sufferer experienced in childhood, the normal ability to develop the coping strategies needed to regulate emotions is blocked, leaving the person defenceless against painful emotional feelings and leading to maladaptive (unhelpful/destructive) behaviours.

The therapy teaches individuals how to cope with, and regulate, their emotions so that they are no longer dominated and controlled by them. This is vital as the inability to control feelings will often wreck crucial areas of life, including friendships, relationships and careers. It is because of these possible effects that DBT also helps individuals develop SOCIAL SKILLS to help reduce the likelihood of them occurring.

Although initially devised for the treatment of BPD, DBT has also been found to be effective in helping people suffering from a large range of psychiatric conditions.